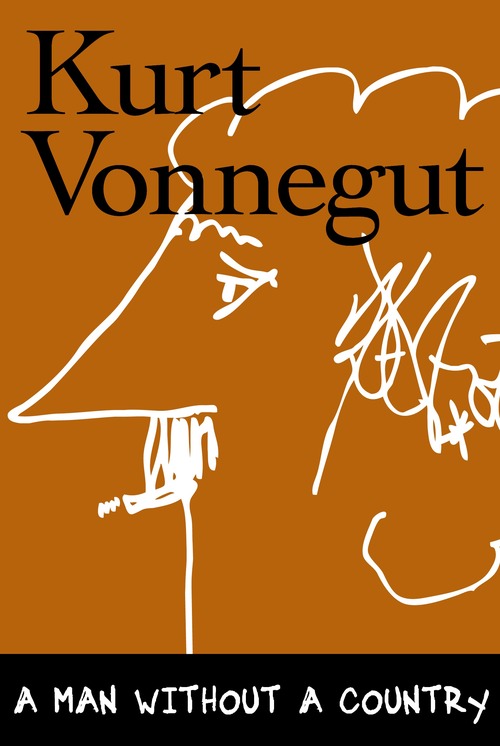 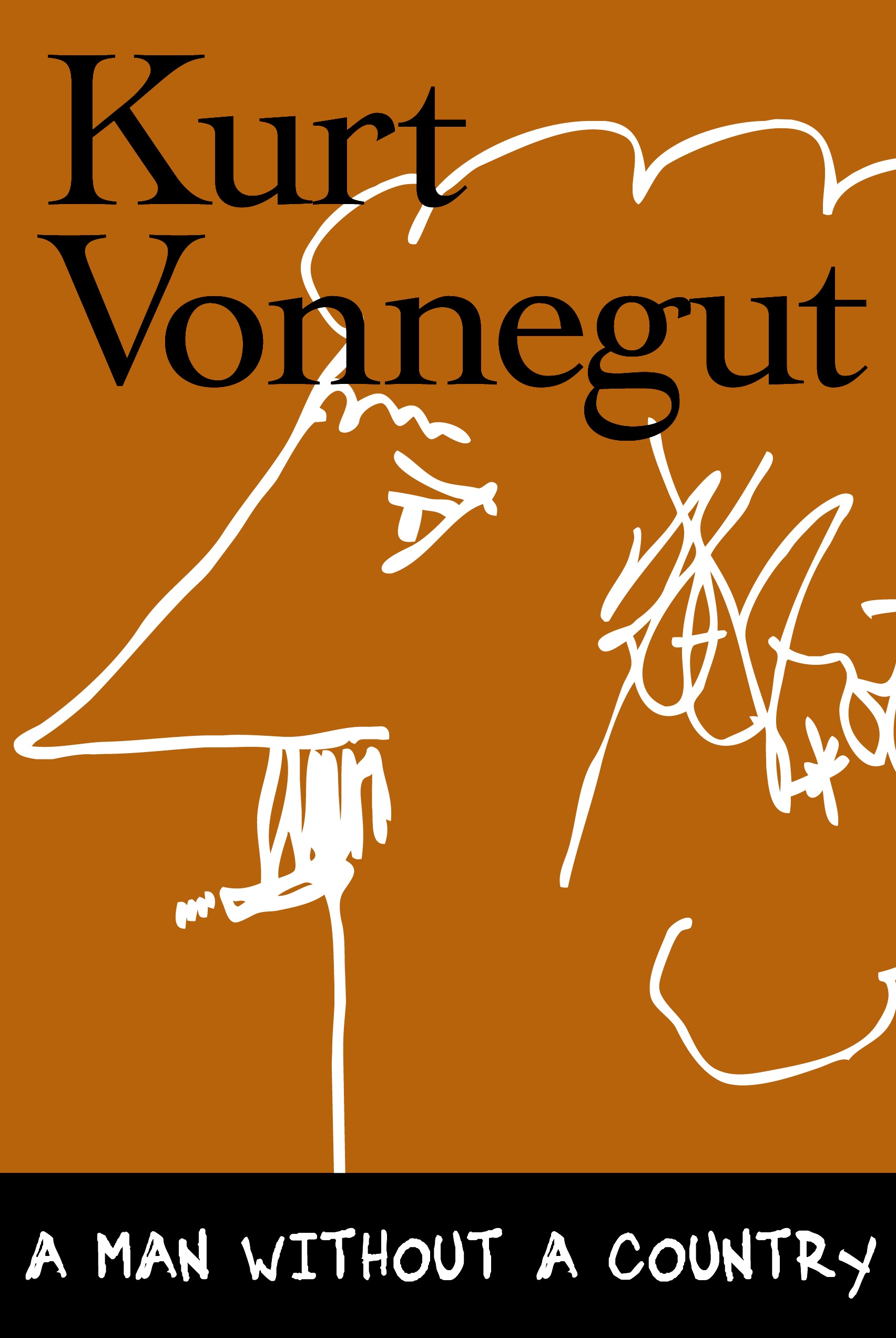 A Man Without a Country is Kurt Vonnegut's hilariously funny and razor-sharp look at life ("If I die—God forbid—I would like to go to heaven to ask somebody in charge up there, 'Hey, what was the good news and what was the bad news?"), art ("To practice any art, no matter how well or badly, is a way to make your soul grow. So do it."), politics ("I asked former Yankees pitcher Jim Bouton what he thought of our great victory over Iraq and he said, 'Mohammed Ali versus Mr. Rogers.'), and the condition of the soul of America today ("What has happened to us?).

Based on short essays and speeches composed over the last five years and plentifully illustrated with artwork by the author throughout, A Man Without a Country gives us Vonnegut both speaking out with indignation and writing tenderly to his fellow Americans, sometimes joking, at other times hopeless, always searching.

A Man Without a Country Kurt Vonnegut Daniel Simon

Kurt Vonnegut, A Man Without a Country

“During the darkest years of the Bush administration, these essays…were guide and serum to anyone with a feeling that pretty much everyone had lost their minds.”

“[L]ike his literary ancestor Mark Twain, his crankiness is good-humored and sharp-witted, and aimed at well-defended soft spots of hypocrisy and arrogance … On Nov. 11—the holiday Vonnegut, who was a P.O.W. in Germany in World War II, has always preferred to think of as Armistice Day—he will turn 83, and since he has no expectation of a heavenly perch from which to look down and eavesdrop on his friends, it is best that we appreciate him while he's still around. A Man Without a Country' is a fine place to start, especially since it can lead us back to Mother Night and Slaughterhouse-Five and The Sirens of Titan and the stories collected in Bagombo Snuff Box. In other words, it's like sitting down on the couch for a long chat with an old friend.”

“Although A Man Without a Country has its roots in…essays and public statements, it is, at heart, a different type of project, fuller, more integrated, not a collection of loose ends so much as a testament … Certainly, A Man Without a Country is as overtly political a book as Vonnegut has written, a lament for an America that is no longer, in which, the author argues, social justice has been subsumed by war and fear. At the same time, it may be as close as Vonnegut ever comes to a memoir, with its mix of autobiography and social commentary, its reflections on topics as varied as our fossil fuel addiction and longtime heroes like Twain and labor and political leader Eugene V. Debs.”

Happy Birthday to Kurt Vonnegut, A Man Without a Country

Toward the end of his life Kurt Vonnegut completed what would be the nearest he ever came to writing his autobiography: A Man Without a Country. Now that so many of us are feeling unmoored, here’s a snippet on the occasion of what would have been Vonnegut's ninety-fourth birthday:

. . . The most I can give you to cling to is a poor thing, actually. Not much better than nothing, and maybe it’s a little worse than nothing. It is the idea of a truly modern hero. It is the bare bones of the life of Ignaz Semmelweis, my hero.

Ignaz Semmelweis was born in Budapest in 1818. His life overlapped with that of my grandfather and with that of your grandfathers, and it may seem a long time ago, but actually he lived only yesterday.

He became an obstetrician, which should make him modern hero enough. He devoted his life to the health of babies and mothers. We could use more heroes like that. There’s damn little caring for mothers, babies, old people, or anybody physically or economically weak these days as we become ever more industrialized and militarized with the guessers in charge.

I have said to you how new all this information is. It is so new that the idea that many diseases are caused by germs is only about 40 years old. The house I own in Sagaponack, Long Island, is nearly twice that old. I don’t know how they lived long enough to finish it. I mean, the germ theory is really recent. When my father was a little boy, Louis Pasteur was still alive and still plenty controversial. There were still plenty of high-powered guessers who were furious at people who would listen to him instead of to them.

Yes, and Ignaz Semmelweis also believed that germs could cause diseases. He was horrified when he went to work for a maternity hospital in Vienna, Austria, to find out that one mother in ten was dying of childbed fever.

These were poor people—rich people still had their babies at home. Semmelweis observed hospital routines, and began to suspect that doctors were bringing the infection to the patients. He noticed that the doctors often went directly from dissecting corpses in the morgue to examining mothers in the maternity ward. He suggested as an experiment that the doctors wash their hands before touching the mothers.

What could be more insulting? How dare he make such a suggestion to his social superiors? He was a nobody, he realized. He was from out of town, with no friends and protectors among the Austrian nobility. But all that dying went on and on, and Semmelweis, having far less sense about how to get along with others in this world than you and I would have, kept on asking his col- leagues to wash their hands.

Subsequently, it might be said that he has saved millions of lives—including, quite possibly, yours and mine. What thanks did Semmelweis get from the leaders of his profession in Viennese society, guessers all? He was forced out of the hospital and out of Austria itself, whose people he had served so well. He finished his career in a provincial hospital in Hungary. There he gave up on humanity—which is us, and our information- age knowledge—and on himself.

One day, in the dissecting room, he took the blade of a scalpel with which he had been cutting up a corpse, and he stuck it on purpose into the palm of his hand. He died, as he knew he would, of blood poisoning soon afterward.

The guessers had had all the power. They had won again. Germs indeed. The guessers revealed something else about themselves, too, which we should duly note today. They aren’t really interested in saving lives. What matters to them is being listened to—as, however ignorantly, their guessing goes on and on and on. If there’s any- thing they hate, it’s a wise human.

So be one anyway. Save our lives and your lives, too. Be honorable.