U.S. Power in Iraq and Beyond 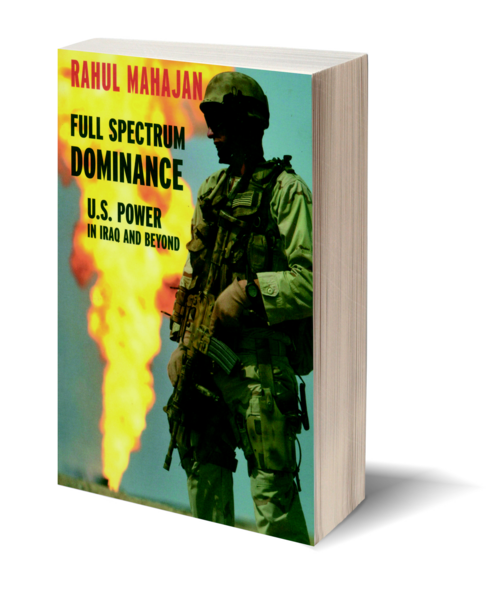 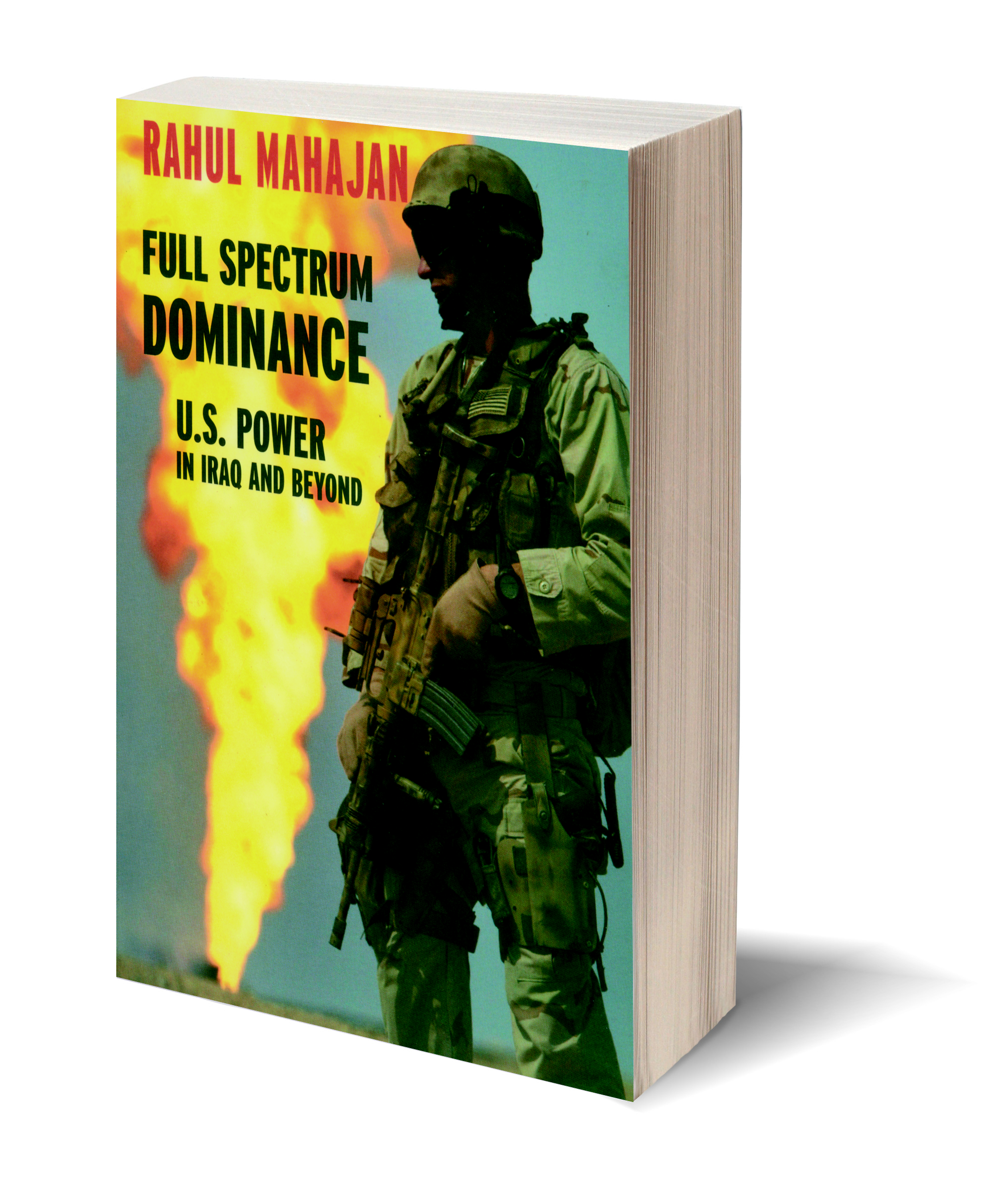 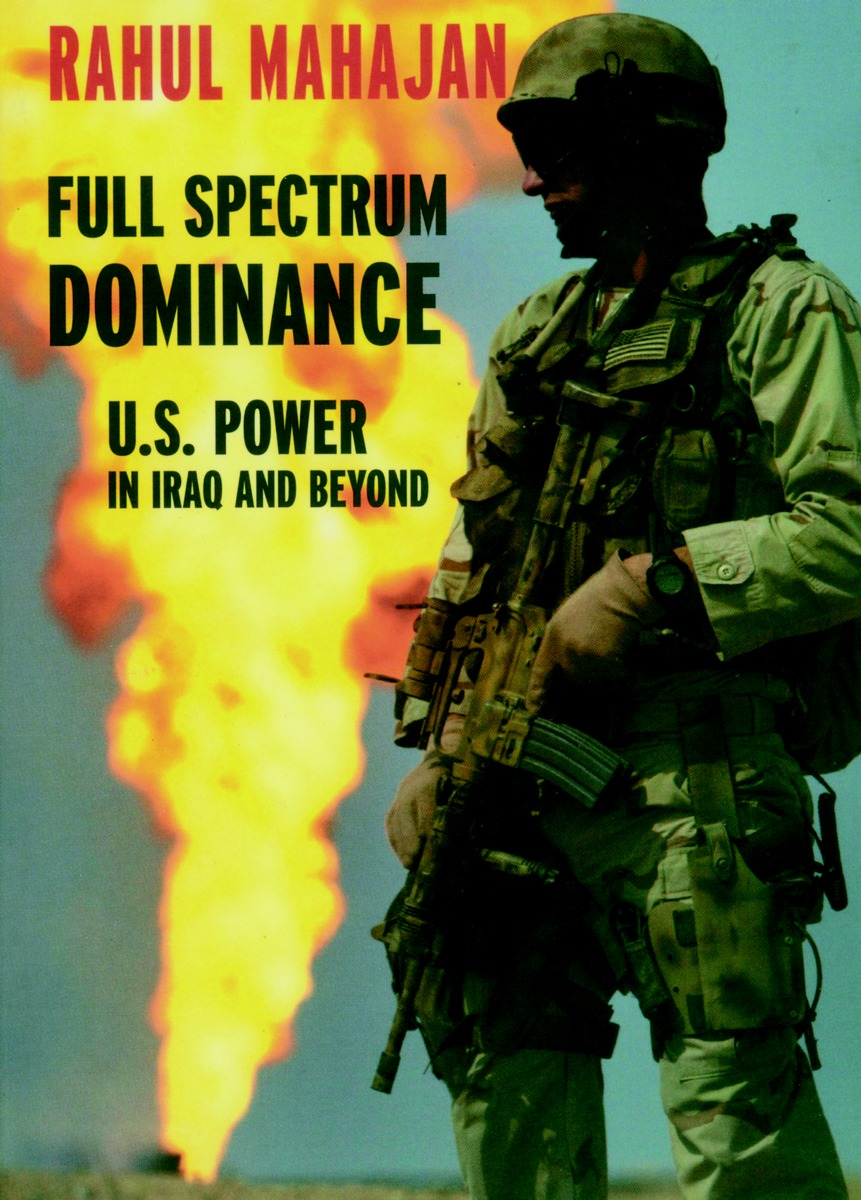 The continuing absence of weapons of mass destruction in Iraq has put the Bush administration's drive to war under renewed scrutiny. Although George W. Bush decried the "revisionist historians" who claim retrospectively that Iraq was no threat, in fact the administration knew there was no threat long before the war started and, as Rep. Henry Waxman and others argue, engaged in a systematic pattern of deception regarding weapons of mass destruction.

In Full Spectrum Dominance: U.S. Power in Iraq and Beyond, Rahul Mahajan addresses this deception while contextualizing U.S. policy toward Iraq within a larger vision of U.S. global dominance. As soon as the Pentagon and Twin Towers were attacked, Mahajan asserts, a war against on Iraq became inevitable, in the absence of massive resistance. Donald Rumsfeld issued orders to implicate Iraq within hours of the events of September 11 and, Mahajan persuasively argues, a design for war was in the works—if not unveiled—at that moment. In this compelling big-picture assessment of the U.S. war on Iraq, Mahajan suggests that this devastating event offers lessons for understanding the contemporary role of the United States in the world. He argues that Iraqi connections to al-Qaeda and other terrorist organizations; Iraq's putative weapons of mass destruction; and the Bush administration’s stated desire to bring peace, democracy, and liberation to the Middle East are pretexts obscuring a fundamentally offensive posture by the United States. Combining his experience as an anti-Iraq sanctions activist with a keen analysis of U.S. foreign policy in the post-Cold War era, Mahajan provides the analysis that has been overlooked in the mainstream debate. Situating Iraq within the larger context of post-9/11 foreign policy, he analyzes the Bush National Security Strategy and the new neoconservative vision of achieving increasing degrees of global domination and control. Presented with unflinching clarity, Mahajan's research demonstrates that the war on Iraq was part of a much larger plan, assembled before 9/11 and, as stated by the Project for a New American Century, needing only a "new Pearl Harbor" to implement it.

Beginning with a review of Iraq strangulation by more than twelve years of sanctions, Mahajan dismantles step-by-step the administration’s arguments for the war. He then looks forward to address questions that remain unresolved by the military effort, examining U.S. intentions in occupying Iraq and its plans for the Middle East and reengaging the administration's compromising positions on weapons of mass destruction, international law, and oil.

Mahajan concludes by sketching in broad strokes the shape of the latest U.S. strategy in Iraq and beyond. Challenging the sincerity of U.S. democracy-making in the Middle East, Mahajan suggests instead that regime change indicates a U.S. expansion of military control of which we should be deeply concerned.

“For those of us in the peace movement who truly thought we could stop the war in Iraq, Full Spectrum Dominance shows us our naivite. Its deep analysis of the policies and strategies of U.S. foreign policymakers is sobering. But author Rahul Mahajan is not just an academic but an activist. He provides us the tools to understand the forces we are up against so we can better challenge them. The book is essential for those who wish to continue to fight against empire.”

“Rahul Mahajan's book is a timely and hard-hitting analysis of the implications of the U.S. war against Iraq. Mahajan presents the reader a picture of the reality of the U.S. imperial state, and its efforts at further world domination. For anti-war, global justice or any progressive-minded activist concerned with the impact of US foreign policy, get hold of this book!”

Rahul Mahajan is a longtime antiwar activist at the local and national level. After receiving his PhD at the University of Texas at Austin, he became a founding member of the Nowar Collective and served on the National Board of Peace Action, the nation's largest grassroots peace organization. Mahajan’s first book, The New Crusade: America's War on Terrorism, has been described as "mandatory reading for all those who want to get a handle on the war on terrorism." He writes frequently for mainstream and alternative print media and for websites such as the Baltimore Sun, USA Today, Common Dreams, Zmag, Alternet, and Counterpunch.