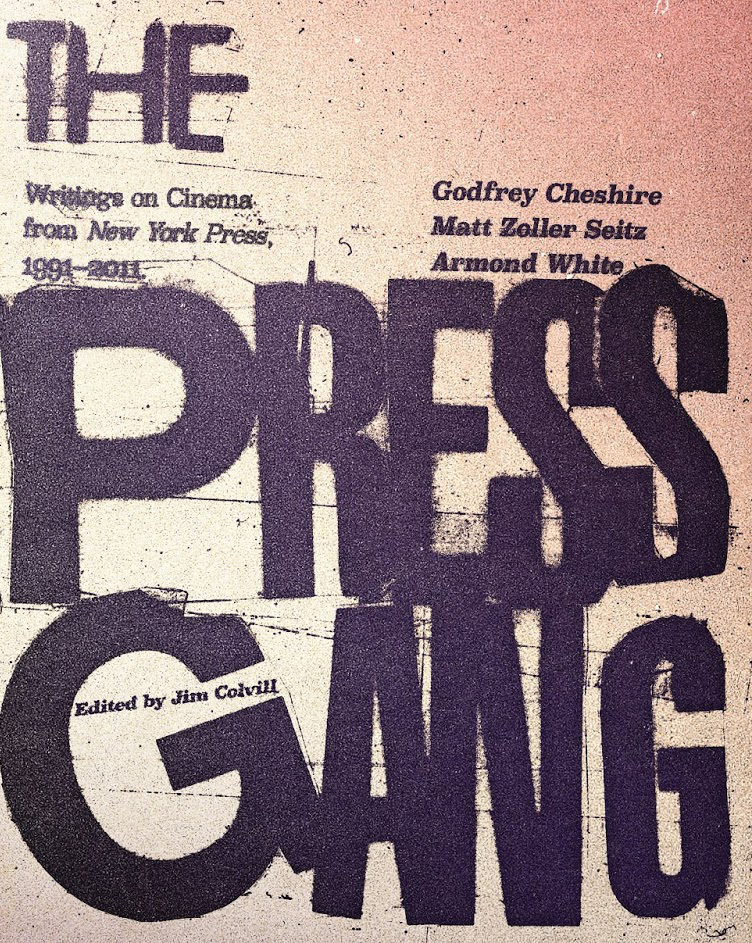 Comprising of the kind of long-form criticism that is all too rare these days, the weekly film columns in the NY Press included polemics, reviews, interviews, festival reports and features. A far cry from what is often derisively termed the "consumer report" mode of criticism, Cheshire, Seitz and White were passionately engaged with the film culture of both their own time, and what had come before. They constituted three distinctly different voices: equally accomplished, yet notably individual, perspectives on cinema. Their distinctive tastes and approaches were often positioned in direct dialogue with each other, a constant critical conversation that frequently saw each writer directly challenging his colleagues. Dialogue is important in criticism, and here you can find a healthy example of it existing under one proverbial roof. The Press Gang is three-way dialogue between Cheshire, Seitz and White assesses the 1990s in cinema, along with pieces on New York's vibrant repertory scene that allow us to read the authors' takes on directors such as Hitchcock, Lean, Kubrick, Welles, Fassbinder and Bresson; as well as topics such as the legacy of Star Wars, film noir, early film projection in New York City, the New York Film Critics Circle, Sundance, the terrorist attacks of 9/11 and the emerging cinema of Iran and Taiwan.

Essay Collections and Writing on WritingBooks on FilmNEW RELEASES

“Film fans will love this massive compendium of intellectually savvy reviews from the long-defunct New York Press. With great research and effort, editor Colvill has brought together more than 200 long-form film reviews and essays from the “raucous, drunken, snotty and punk rock” NYPress, as former staffer Jim Knipfel describes it in his highly informative introduction... Literate and reflective, these reviews rival those by more famous critics like Pauline Kael and Andrew Sarris.”

GODFREY CHESHIRE is an award-winning film critic and filmmaker based in New York City. His writings have appeared in the New York Times, Variety, The Village Voice, Film Comment, Cineaste, Sight & Sound, RogerEbert.com and other publications. He is the director of the documentary Moving Midway and author of In the Time of Kiarostami: Writings on Iranian Cinema, Conversations with Kiarostami, and is a contributor to The Press Gang.

Matt Zoller Seitz is the TV critic for New York magazine, the editor-at-large of RogerEbert.com, a finalist for the Pulitzer Prize in criticism, and the author of The Wes Anderson Collection, The Oliver Stone Experience, Man Men Carousel, Guillermo del Toro's The Devil's Backbone (with Simon Abrams), and TV: The Book and The Sopranos Sessions (both with Alan Sepinwall).

Armond White won the 2014 American Book Award for Anti-Censorship. He is a film critic for National Review and was arts editor for The City Sun, CityArts and reviewer for Out magazine. He is author of The Resistance: Ten Years of Pop Culture That Shook the World, Rebel for the Hell of It: The Art-Life of Tupac Shakur, Keep Moving: The Michael Jackson Chronicles, New Position: The Prince Chronicles and Make Spielberg Great Again.

JIM COLVILL is a freelance editor and publisher based in New York City. He publishes books on cinema with The Film Desk and edited The Press Gang.