The Dead Eye and the Deep Blue Sea

A Graphic Memoir of Modern Slavery 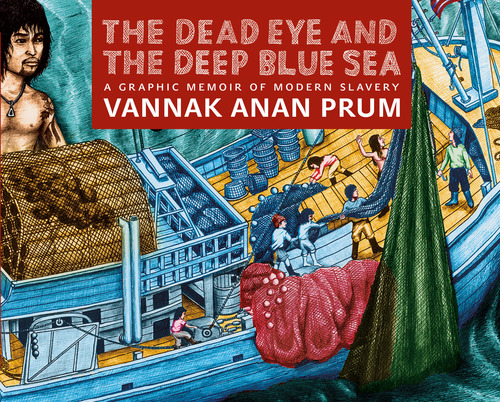 Too poor to pay his pregnant wife’s hospital bill, Vannak Anan Prum left his Cambodian village to seek work in Thailand. Men who appeared to be employers on a fishing vessel promised to return him home after a few months at sea, but instead Vannak was held hostage on the vessel for four years of hard labor. Amid violence and cruelty, including frequent beheadings, Vannak survived in large part by honing his ability to tattoo his shipmates—a skill he possessed despite never having been trained in art or having access to art supplies while growing up.

To escape, Vannak and a friend jumped into the water and, hugging empty fish-sauce containers. At the harbor, they were taken into a police station . . . then sold by their rescuers to work on a plantation. Vannak was kept as a laborer for more than a year before an NGO could secure his return to Cambodia. After five years away, Vannak was finally reunited with his family.

Vannak documented his ordeal in raw, colorful, detailed illustrations, first created because he believed that without them no one would believe his story. Indeed, very little is known about what happens to the men and boys who end up working on fishing boats in Asia, and these images are some of the first records. In regional Cambodia, many families still wait for men who have disappeared across the Thai border and out to sea. The Dead Eye and the Deep Blue Sea is a testament to the lives of these many fishermen trapped on boats in the Indian Ocean.

“An essential wake-up call for adults and high schoolers about the present-day misery lurking behind comfy, tech-enhanced modern life.”

“Vannak Anan Prum provides a most vivid and compelling testimony, through luscious watercolors and the author’s honest oral account, transcribed and composed to meld with Prum’s artwork. ... This is a unique and remarkable book that readers will quickly find themselves immersed in. Human trafficking is not an obvious subject matter for the casual reader but Mr. Prum handles the subject with great dignity, never delivering a false note, and even maintaining a sense of hope throughout.”

“We need more stories like Vannak’s, but we also need them to be told as skillfully and passionately and creatively as Vannak tells his, and we need this to happen until these stories are no longer eye-openers, but narratives we accept as common and pledge to take real action to prevent.”

“The Dead Eye and the Deep Blue Sea is a story that illustrates how art underwrites freedom. In telling how freedom and art operate together to work for mutual sustenance, Vannak tells a story that is larger than Thai fishing fleet slavery.”

“A survivor’s graphic memoir and a feature film reveal horrific exploitation and violence on the high seas – and the shame of the world’s complicity.” 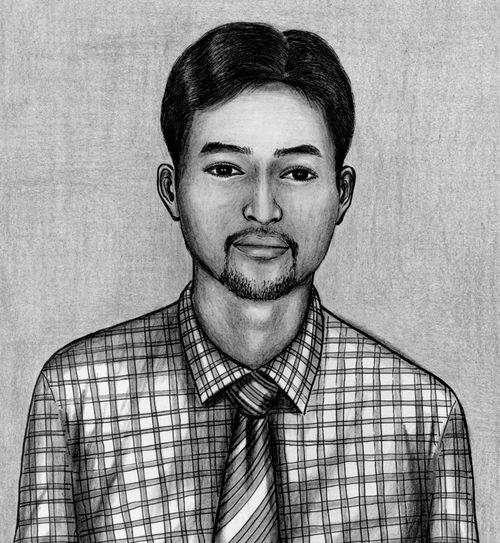 Vannak Anan Prum is a Cambodian survivor of human trafficking. While looking for work on the Thai–Cambodian border, he was detained as a slave on a fishing boat, enduring hard labor and hellish treatment for four grueling years. After making his escape by literally jumping ship, Vannak was sold by his ostensible rescuers on the Malaysian coast to a plantation owner and police official. After another year of hard labor and imprisonment, a human rights organization helped him finally return to his family.

At home in Cambodia, he drew pictures of what he remembered to explain his whereabouts during the course of his years as a modern-day slave. Though never formally educated or trained in art, Vannak has loved drawing since childhood—from figures traced in the dirt, to tattoos etched into skin, to these pencil and ink illustrations detailing his personal odyssey.

In 2012 Prum was given a State Department Human Rights Defender Award, presented to him directly by then-US Secretary of State Hillary Clinton.

To support Vannak and see more of his artwork, visit his online store, https://www.zazzle.com/vannakprum/