Mona Damluji writes, studies and teaches about oil cultures, cinema history and the Middle East as an assistant professor at UC Santa Barbara. She is a co-producer of the Peabody- and Emmy-nominated web series The Secret Life of Muslims, and has curated exhibits and events around the globe that feature path-breaking art, film, photography, and comics. Mona and her partner live in California with their two hilarious children. 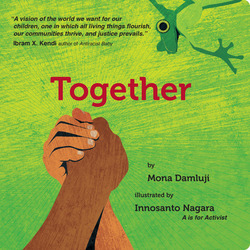 by Mona Damluji and Innosanto Nagara