September20 at Word Up Community Bookshop in New York, NY 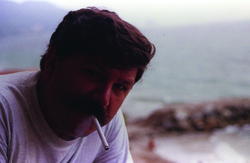 Paco Ignacio Taibo II, author of more than fifty books, is a distinguished historian and essayist. He is also renowned worldwide for his detective novels. His numerous literary honors include three Hammett Prizes, a Planeta prize for the best historical novel, and the Bancarella Prize for his biography of Che Guevara. In December 2018, Taibo was named director of the Mexican government’s national publishing house, Fondo de Cultura Economica, by the new Obrador administration.

Mariana Romo-Carmona (@piedrambar) is the author of Living at Night, Speaking Like An Immigrant, and Sobrevivir y otros complejos: Poems in Englillano. A longtime activist in the Latinx and Queer fronts, she produced and hosted the Connecticut LGBT radio program, “There is Another Alternative,” and co-founded Latina lesbian groups in Boston and New York City. She was an editor with Kitchen Table Press and co-edited Cuentos: Stories by Latinas; co-founder and editor, COLORLife! Magazine; editor-translator of Coversaciones; and founder-editor and translator of Escritorial Press. She has taught in the Latin American and Latino Studies Program at CUNY, and in the MFA in Writing Program at Goddard College, for many years.